How to Transfer Apple Music to Sony Walkman Player?

Music has become a must for people all over the world. Whether they are poor or rich, happy or sad, people like to listen to music. Because listening to music can feast their ears and make them feel more relaxed. People who love music always listen to music from their Sony Walkman, Ipod, Zune, or other MP3 players on their way to home, in subway and in home. If you are one of Apple Music's subscribers, you should be also curious about how to transfer Apple Music to portable Walkman or other MP3 players for streaming.

Just out of curiosity is it possible to import Apple Music to Walkman Player?

In the following tutorial, we would show you how to convert Apple Music to MP3 format and transfer your Apple Music to Sony Walkman MP3 Player as an example.

How to Transfer Apple Music to Sony Walkman Player?

Launch Sidify Apple Music Converter and iTunes will be automatically launched and disappear quickly. Then click "+" to add Apple Music tracks that you want to convert. Do so and it’ll give you your familiar iTunes organization in its own window. Clicking the Setting button on the upper right of Sidify interface, a new window would pop up. Here you can choose output format as MP3, AAC (M4A) or FLAC supported by Walkman, set the converting speed up to 20X and adjust the output quality up to 320 Kbps. Besides, the output path is also changeable as required.

Click "Convert" to start conversion and get a cup of coffee. After conversion finished, you can click 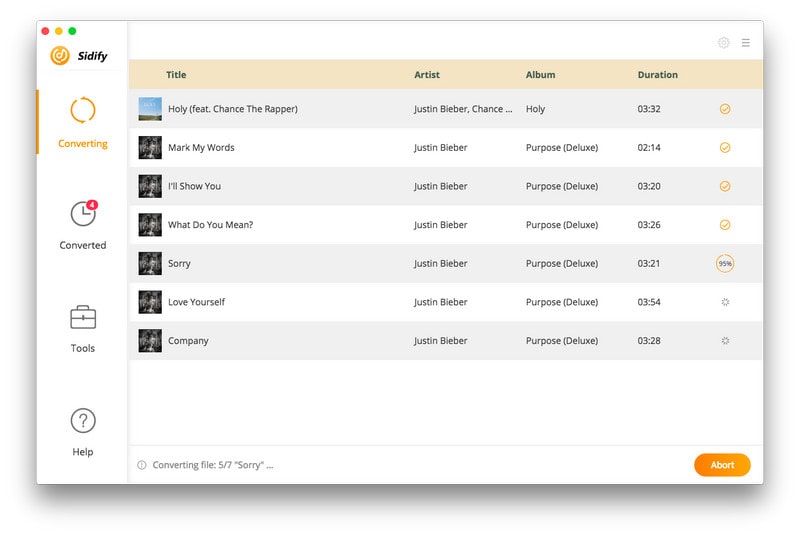 Drag and drop the converted MP3 files from the computer to the Sony Walkman player.

Step 6Unplug Your Walkman and Play Your Apple Music.

After your transfer is complete, disconnect your USB cable and enjoy your Apple Music anywhere you go.

Note: The trial version of Sidify Apple Music converter has 3-minute conversion limit. If you want to unlock the time restriction, puchase the Sidify Pro now.

How to Transfer Apple Music to Fiio X3

How to Convert iTunes M4P to MP3